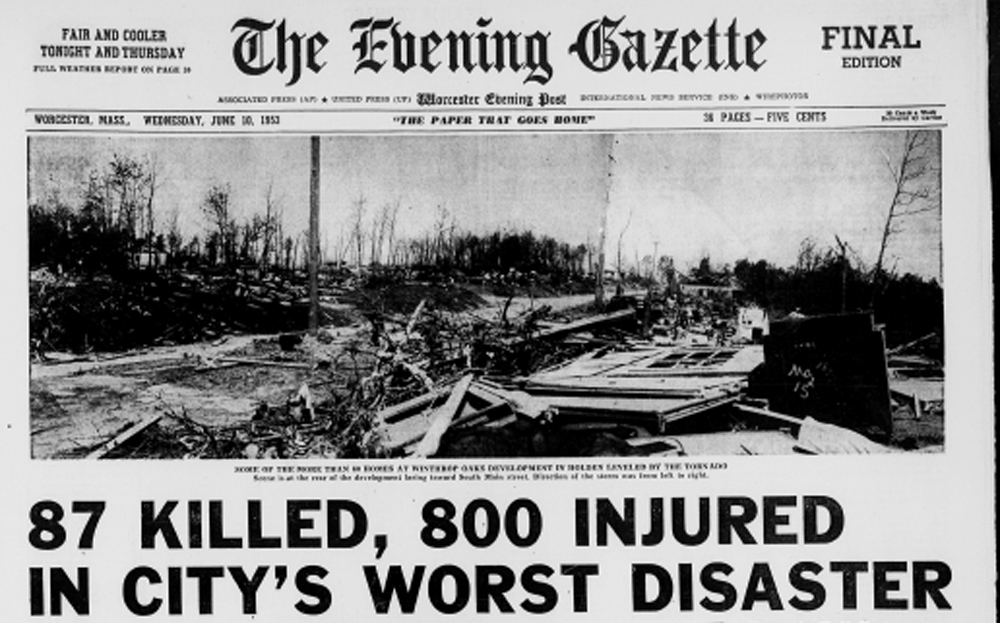 From the pages of AAA Horizons Newspaper.

Farm animals flew by windows, a bus was picked up and casually tossed against a building, and 94 people lost their lives. One might think that Godzilla was storming the streets of Worcester, but no, these memories were all too real for those who survived the great Worcester Tornado of June 9, 1953.

The winds of this F4-level storm, which led to more than $52 million in damage (in 1953 dollars), reached approximate speeds of at least 300 miles an hour. As the 50th anniversary of New England’s worst tornado approaches, the Worcester Historical Museum and the Worcester chapter of the American Red Cross plan to commemorate this historic storm with “84 Minutes: 50th Anniversary of the Worcester Tornado,” a written, visual and oral presentation. The exhibit will be on display is the Worcester Historical Museum’s Rockwell Gallery from June 3 through July 26, 2003.

“Because the tornado took place in the ’50s, lots of people don’t consider it historic,” said Robyn Christensen, Worcester Historical Museum librarian. “We’re encouraging people to come in and share their stories on tape; it’s more personal that way.”

It might be intimidating for some as well, so the museum is offering an online form for shy survivors to record their memories. In addition to sharing intangible things, like memories, the museum is also asking survivors to bring in tangible objects, such as photos, slides and all things hurricane-related.

According to the Blue Hills Observatory in Canton, Mass., about 40 miles east of Worcester, 1953’s “big blow” dropped a two-pound piece of roof, a three-square-foot aluminum trap door, a frozen couch cover and a music box on the hill. In nearby Massachusetts Bay, fishermen found a chunk of frozen mattress, among other tornado debris. 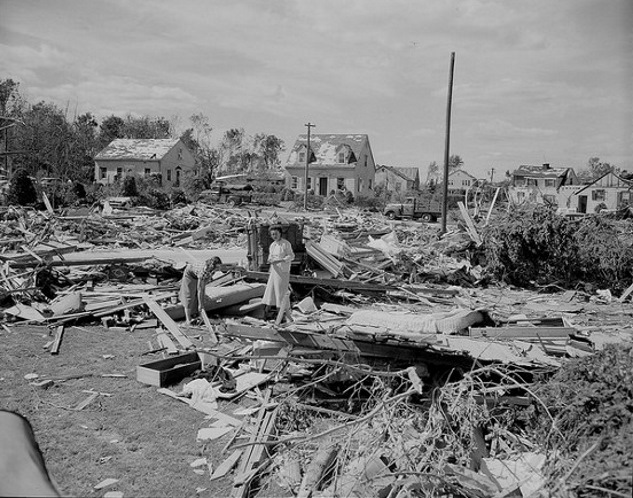 “I thought it was the end of the world,” Mrs. Lillian Palmer told Christensen. “I had been in storms, but nothing like this. There were hailstones that were the size of baseballs, and they came in our dining room through the side windows. I could see debris in the air.

“I heard the top of the house leave,” she added. “Something kept saying to me, ‘Go to the basement.’ We grabbed the two kids and went down with them to the basement. The house was beginning to move and at that moment, the house left. . . . I never witnessed anything like this in my life.”

According to Christensen, New Englanders’ unfamiliarity with fierce tornadoes, as indicated by Palmer, was the primary reason for the high casualty rate. Despite occasional twisters, New England isn’t exactly the heart of tornado country. There was no warning, other than natural signs unknown to locals, so the 84-minute storm took the vast majority of those in Worcester County by surprise.

“People here didn’t understand the warning signs,” noted Christensen. “They looked out their windows and wondered what in the world was going on. . . . The only good to come of the storm was the big outpouring of help for survivors.”