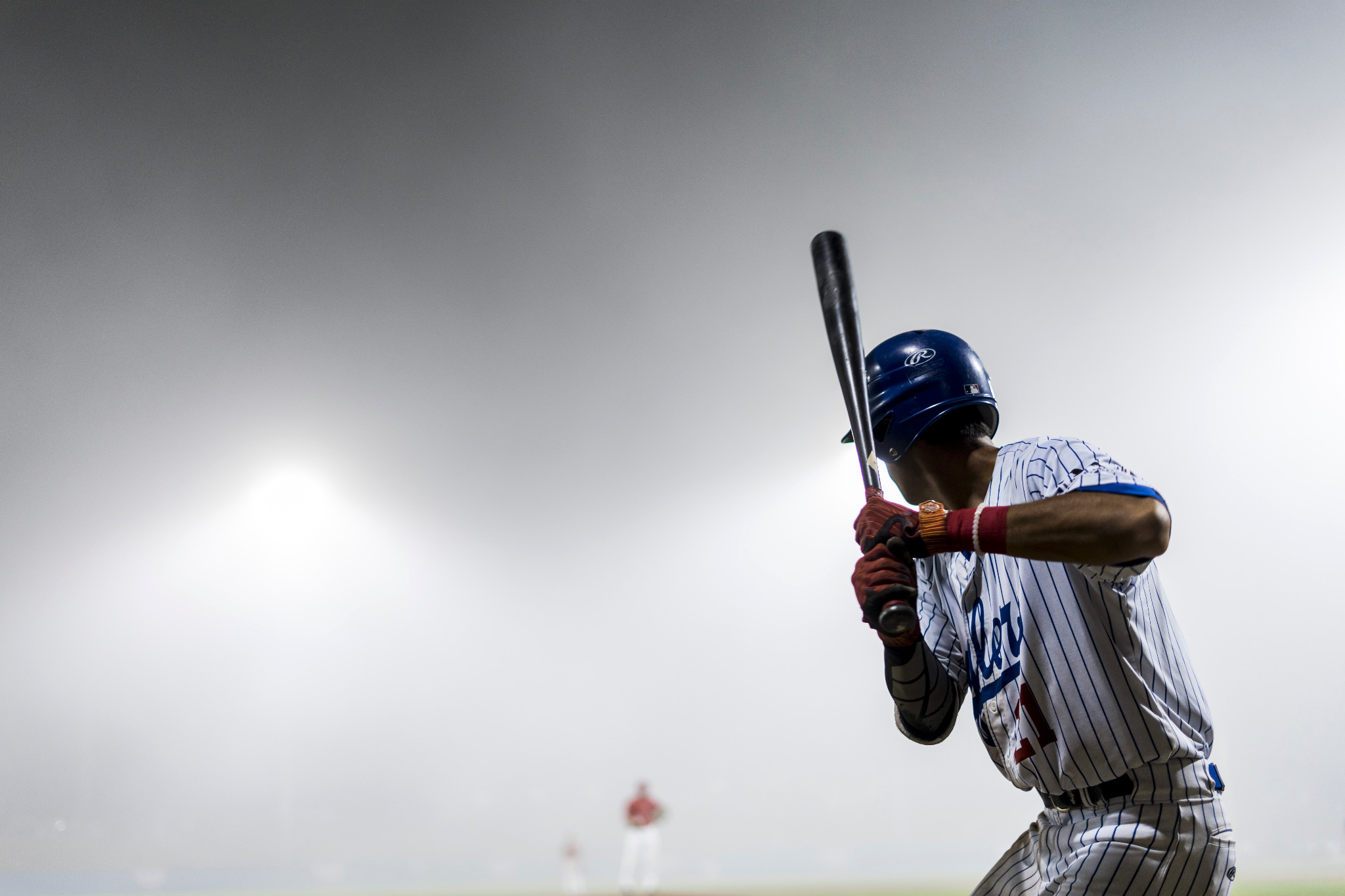 In the Cape Cod Baseball League’s famous ‘Fog Game,’ pitcher Andrew Miller tossed a modern masterpiece. Thanks to the league’s oral-storytelling tradition, the legend lives on.

In the introduction to Eric Enders’ colorful, comprehensive coffee-table book, Ballparks: A Journey Through the Fields of the Past, Present and Future, the author writes, “That’s the thing about ballparks: Context Matters. An otherwise ordinary ballpark can become a place where the extraordinary happens.”

While there’s nothing ordinary about Chatham’s idyllic Veterans Field, something extraordinary did happen at this charming ballpark – at least for four innings – on a misty, magical night 18 summers ago. The context, in this case, was a stubborn chowder-like fog that enveloped the diamond on Friday, July 2, 2004, while Chatham Athletics pitcher Andrew Miller was working on a modern masterpiece.

“That’s the great thing about baseball,” says Cape Cod Baseball League Historian Mike Richard. “Every time you go to a game, you have the opportunity to see something you haven’t seen in person before, whether it’s an unassisted triple play or a grand slam.”

Or Miller’s near-mythical “fog-game” performance. Facing off against a Falmouth Commodores team with seven future big-league players on the roster, Miller flummoxed this star-studded lineup for four innings. Spotting his high-90s fastball with a very hard-breaking slider, the left-handed Miller recorded all 12 outs by strikeout before the persistent fog forced the umpires to call the game in the bottom of the fourth, short of the five innings required to make it an official game. 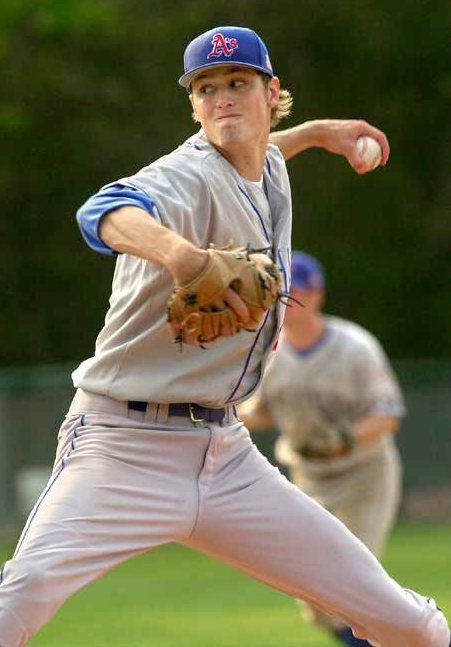 Andrew Miller prepares to unleash a pitch for the Chatham A's.

Although fog-outs in Chatham are fairly common, racking up 12 strikeouts – six looking, six swinging – in four innings is an extremely rare accomplishment.

“We were always aware of the potential for Chatham fog,” says the 37-year-old Miller, who recently retired from the St. Louis Cardinals as one of the best relief pitchers of his generation. “I remember that the fog would roll over the roof of the firehouse across the street, then over [Depot Road] and onto the field. It would get so thick at times that you couldn’t even see your outfielders.

“So, I’m not sure if the fog gave me an advantage or robbed me of a great performance that night,” says the modest Miller. “When I recently saw the [fog game] scorecard, it was a nice flashback that reminded me of the great players on our team and on the Commodores at the time. Looking back, I’m pretty proud of that night.”

Other than allowing an infield single to Falmouth’s switch-hitting shortstop, Cliff Pennington, in the first inning, walking future Red Sox teammate Jacoby Ellsbury in the third and hitting Pennington on a 3-2 count to lead off the fourth, Miller was dominant – if not a little erratic – all night. The second was Miller’s only “clean” inning – three up, three down, all by strikeout.

“Miller was a raw talent that summer, and you didn’t know if he’d have control [of his pitches] or not,” says Vegas Golden Knights broadcaster Dan D’Uva, who called the “fog game” for the fledgling Cape Cod Baseball Network as a college student. “He was like Bambi who hadn’t quite figured out how to walk yet. Harnessing his ability took time, but by his second season on the Cape [2005] he figured it out.” 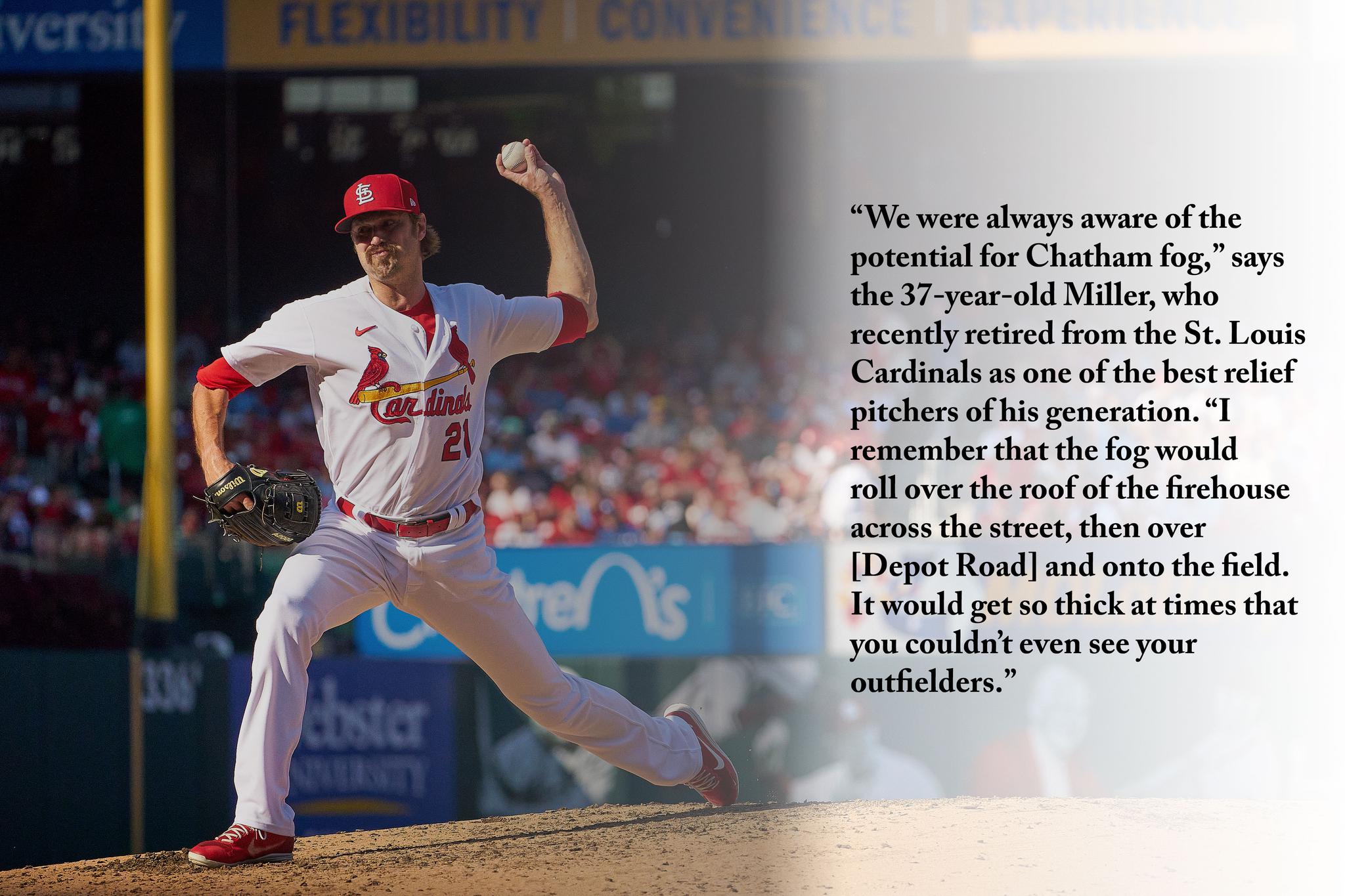 Standing at least six-feet, six inches tall at the time – he topped out at 6’7” as a pro – the 19-year-old Miller had just finished his freshman year at the University of North Carolina at Chapel Hill when he rolled into Chatham. Perched atop the Veterans Field pitcher’s mound in his home-white uniform, topped by a fire-engine red cap and shrouded in fog, the lean lefty with a three-quarters delivery must have been an imposing sight that night, especially for left-handed hitters.

“I remember that game very well,” says former Commodore and Texas A&M star Cliff Pennington, who batted righty and reached base twice that night. “It was always a challenge to see the ball against Andrew, even in good conditions, and obviously the fog was crazy that night. I almost couldn’t see the centerfielder, and I had no idea how the outfielders were going to be able to catch anything.

“I just remember that Andrew was throwing a mid- to upper-90s fastball,” adds Pennington, who enjoyed a 12-year big-league career, primarily with the Oakland A’s. “It looked like he was throwing it from the first base bag, and his slider never stopped coming. . . . Andrew was definitely a special talent; he was one of the best left-handers I had ever seen up to that point.”

“Andrew’s velocity was spectacular that night, and he had his nasty breaking pitch working for him,” says Schiffner, who retired in 2017 with the most wins (541) in Cape League history. “[Miller] had two strikeouts against right-handed hitters, and when his breaking pitch was working that well against righties the left-handers had no shot against him, no shot.

“What was interesting was that he didn't have tremendous control,” adds Schiffner, “but he still back-footed three batters that night.”

According to the Dickson Baseball Dictionary, a back-foot slider is “a slider that starts over the middle of the plate and breaks late, down and in, toward the back foot of the batter. It is thrown by a right-handed pitcher to a left-handed batter, and vice versa.” When a batter swings and misses on such a slider, the plummeting pitch can hit him on the back foot. 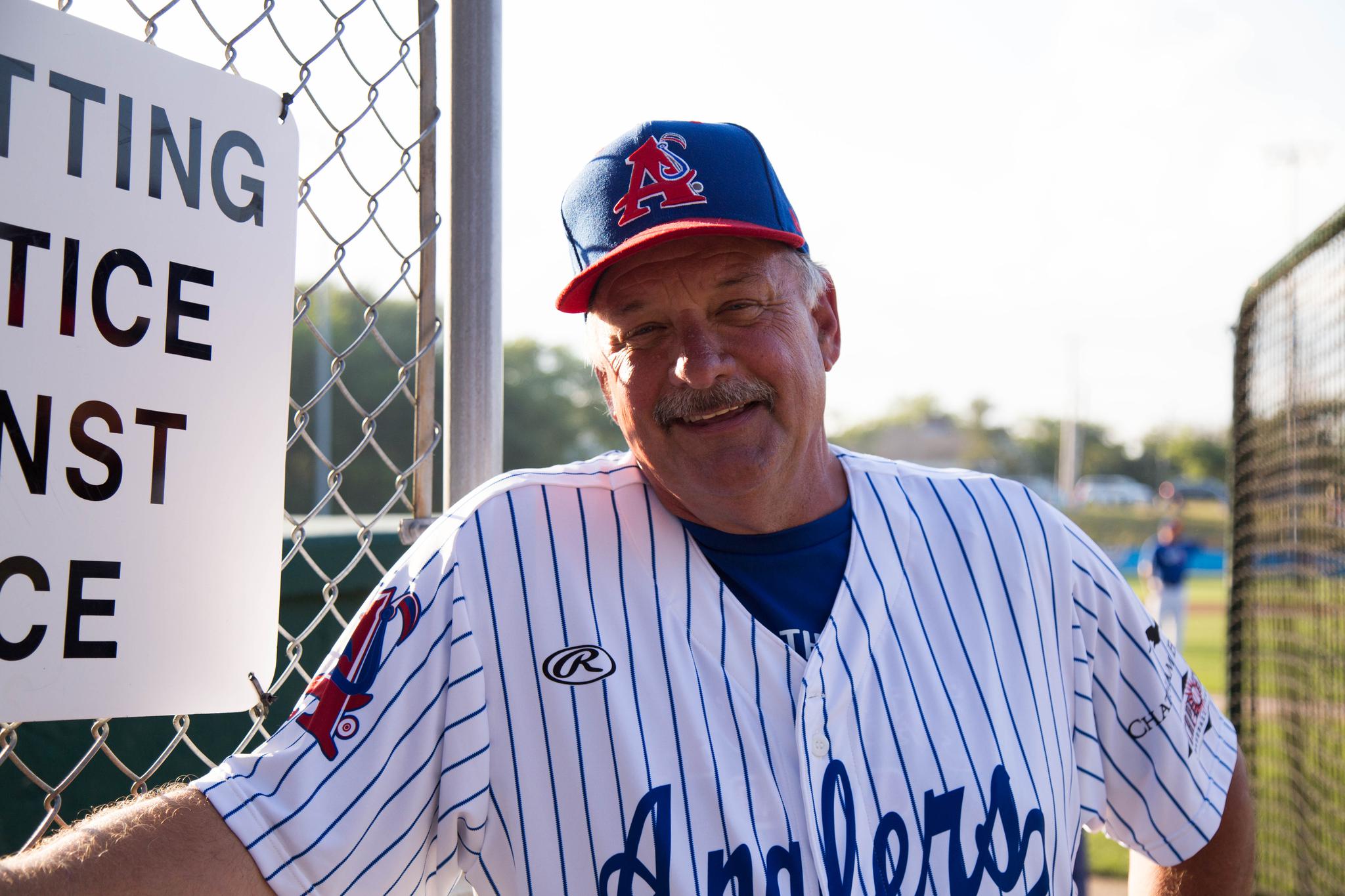 “Andrew’s velocity was spectacular that night, and he had his nasty breaking pitch working for him. [Miller] had two strikeouts against right-handed hitters, and when his breaking pitch was working that well against righties the left-handers had no shot against him, no shot."

“Miller was just dealing that night, throwing one strikeout after another,” says Falmouth Manager Jeff Trundy, who still leads the Commodores. “Our players’ reactions coming back to the dugout were priceless. They weren’t upset or mad; they were almost laughing because they felt helpless. To have kids as talented as our hitters saying, ‘Coach, this isn’t fair,’ was pretty amazing.”

Ironically, it wasn't just the Falmouth hitters who had trouble with Miller's pitching. Due to the tremendous natural movement on Miller’s fastball and the lefty’s amazing slider, Chatham catcher Jake Muyco struggled defensively as well.

When the game was called at about 8:15 p.m., with Chatham threatening to build on a slim 2-1 lead in the bottom of the fourth, it was a cause for celebration in the Commodores’ dugout. “I remember the Falmouth players cheering and running to the team bus,” Schiffner recalls.

Additionally, several sources agree that the Commodores, who lost the league championship series to the Yarmouth-Dennis Red Sox that summer, wanted no part of a possible rematch with Miller.

Instead of joining their teammates on the bus, two of the Commodores’ hardest-hitting stars – right fielder Daniel Carte and left fielder Jacoby Ellsbury – decided to stay behind and eavesdrop on a post-game huddle between Schiffner and Falmouth Manager Jeff Trundy, who were trying to determine a good date for the makeup game. “Jeff’s like me,” notes Schiffner, “and just wants to play baseball.”

Apparently, these two Commodores did not want to play baseball, at least not on the proposed makeup-date of Wednesday, July 7, which would have meant a possible rematch against Miller. “Carte was leaning over Jeff's right shoulder, and Ellsbury was on his left shoulder, and both were screaming, ‘Coach Jeff, no way we're playing on Wednesday!’” says Schiffner, laughing.

Current league President Chuck Sturtevant, who was serving as Falmouth’s general manager at the time, confirms the Commodores’ hesitancy to face the fireballing Miller twice in one week. “I do remember some of our star players like Jacoby Ellsbury, Matt Antonelli and Dan Carte coming into the dugout and saying, ‘[Miller] is unbelievable; we just can’t hit the ball.’ They were scared of having to face him in the makeup game.” 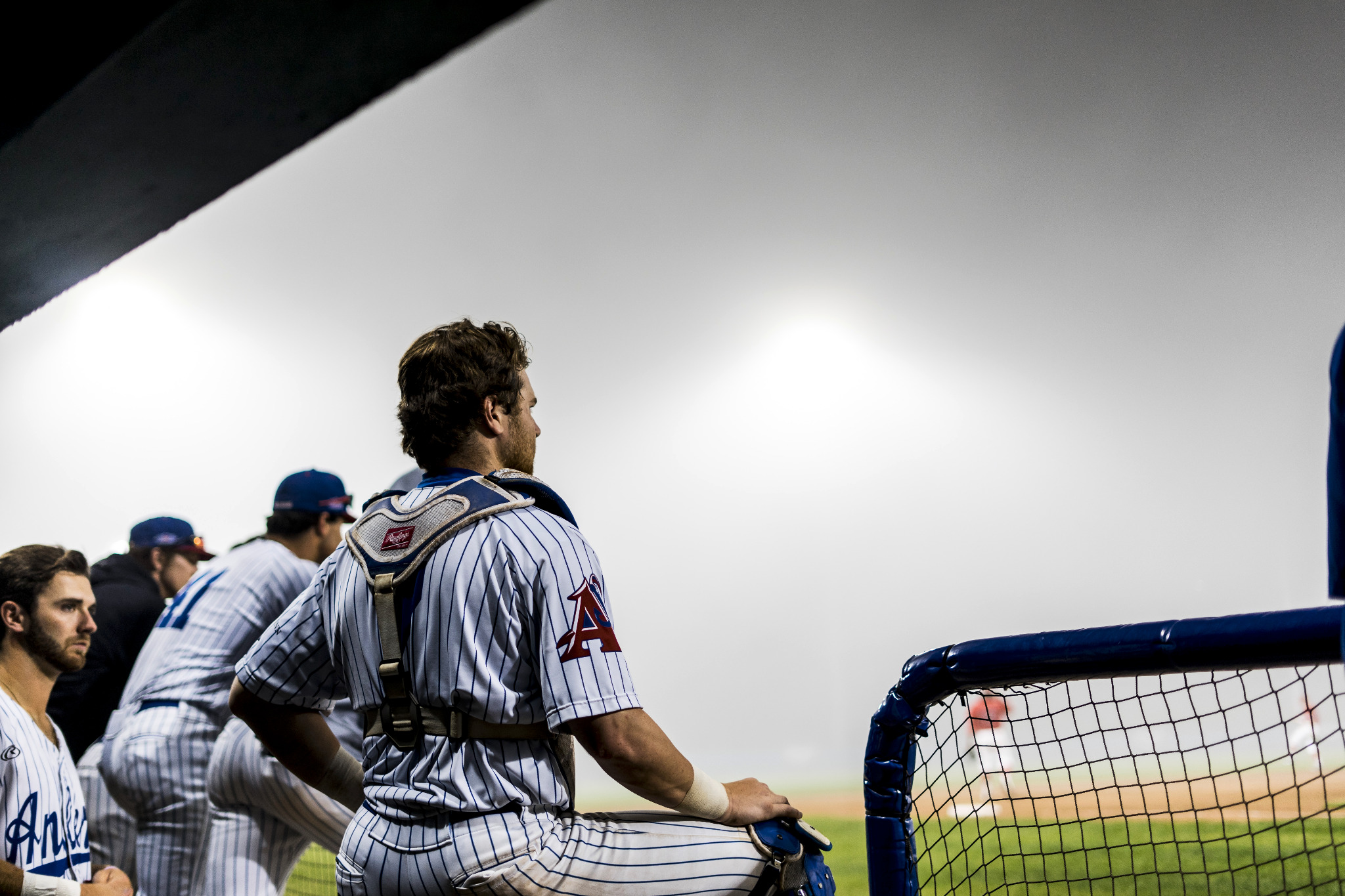 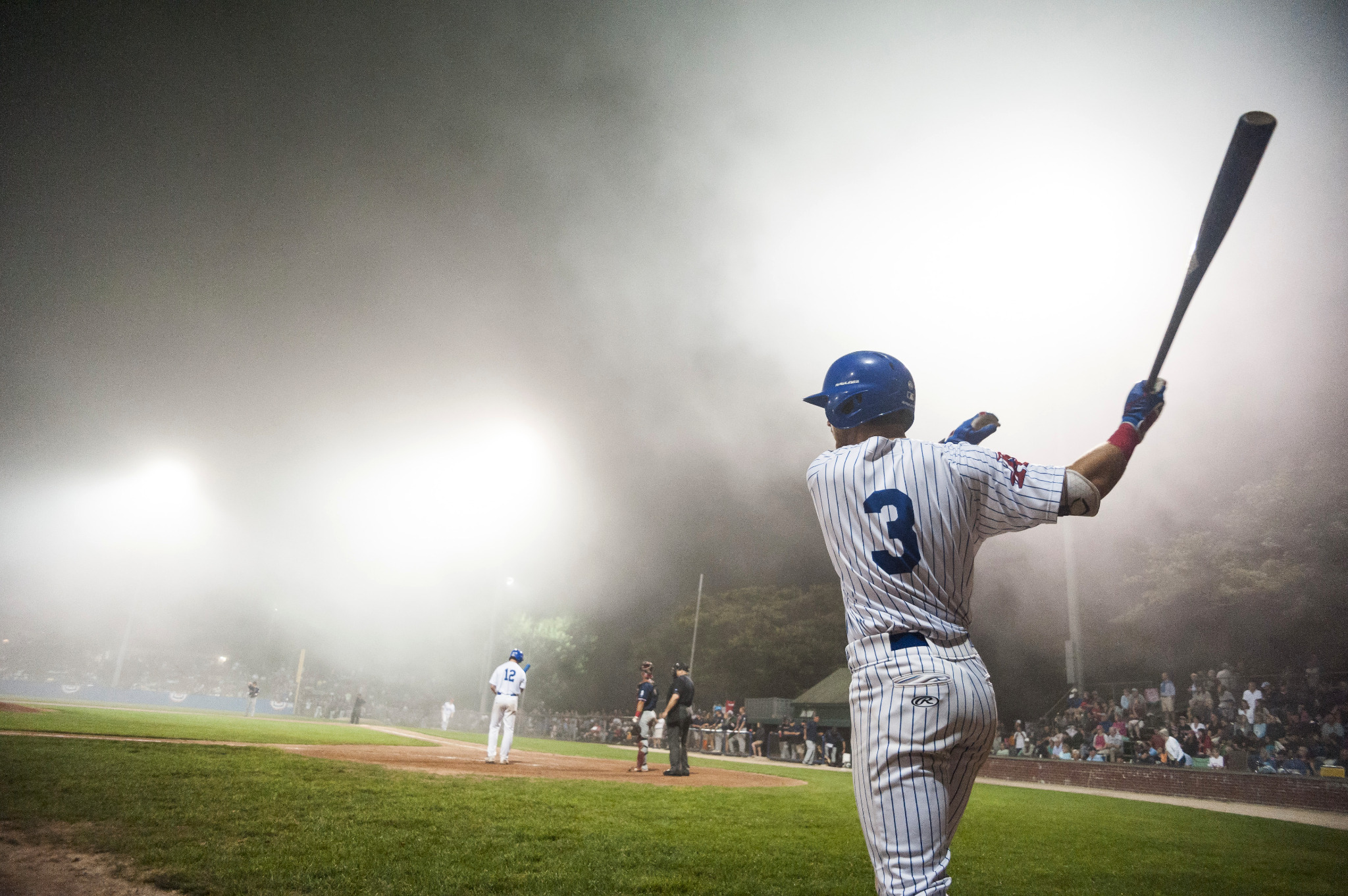 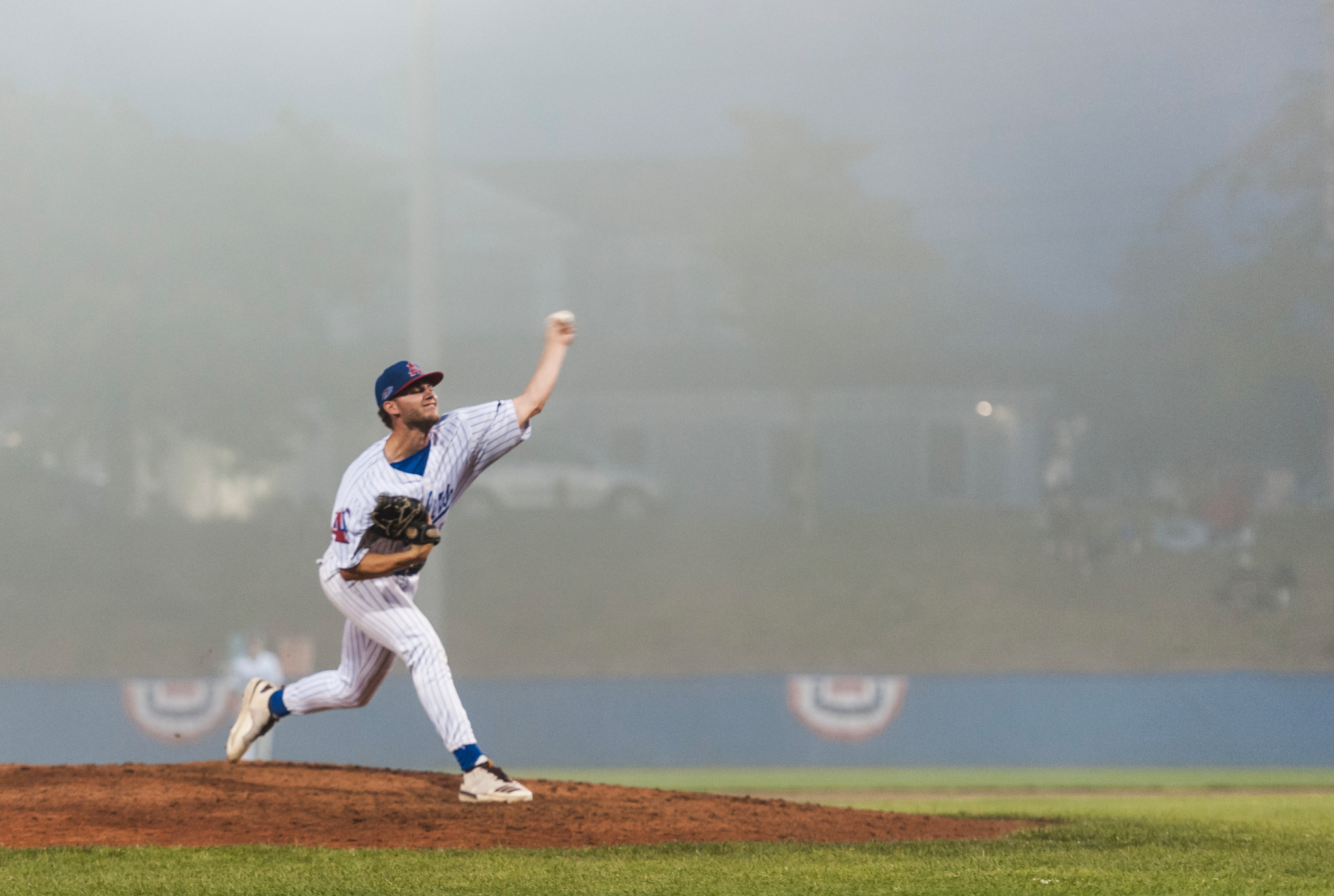 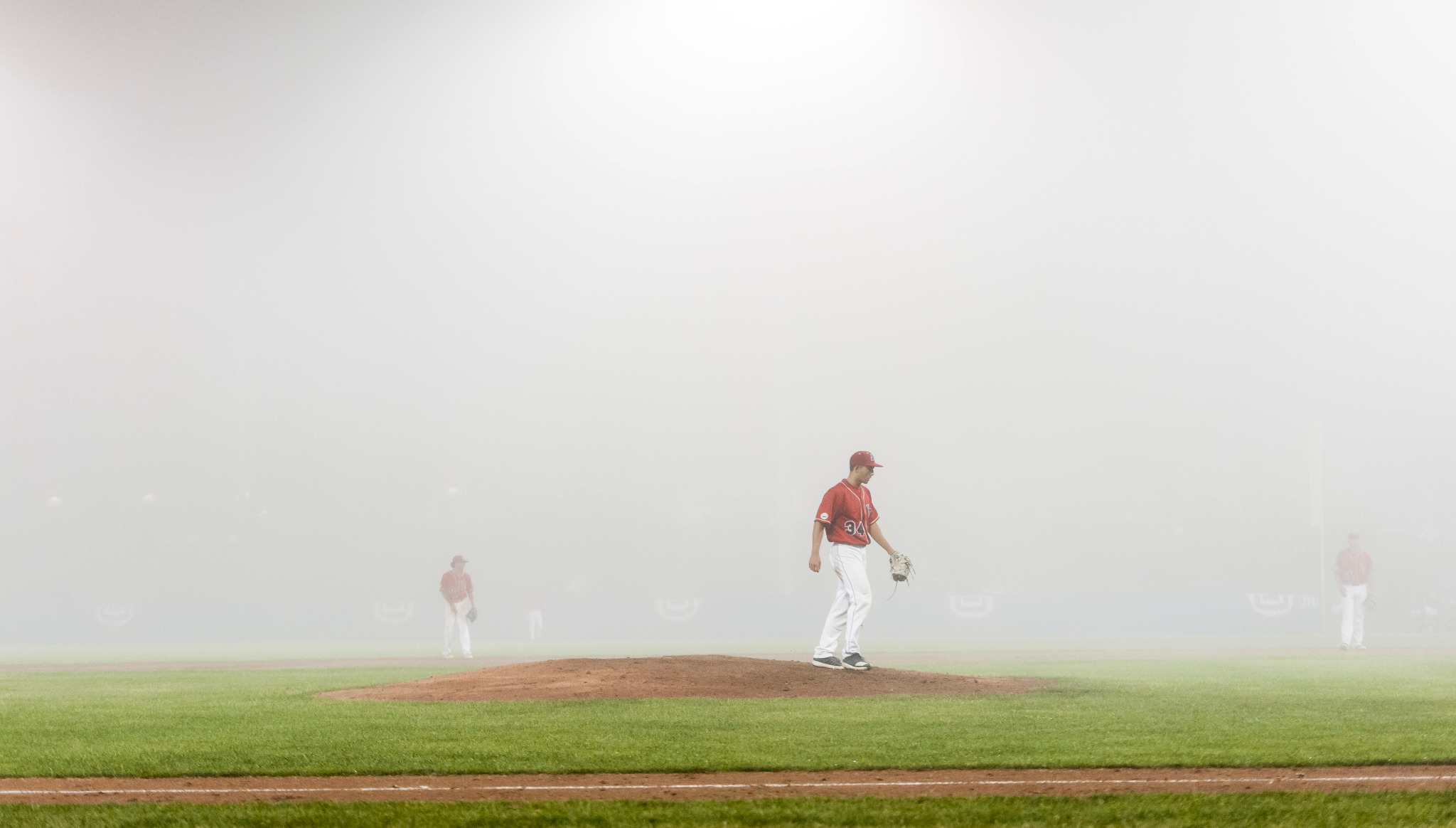 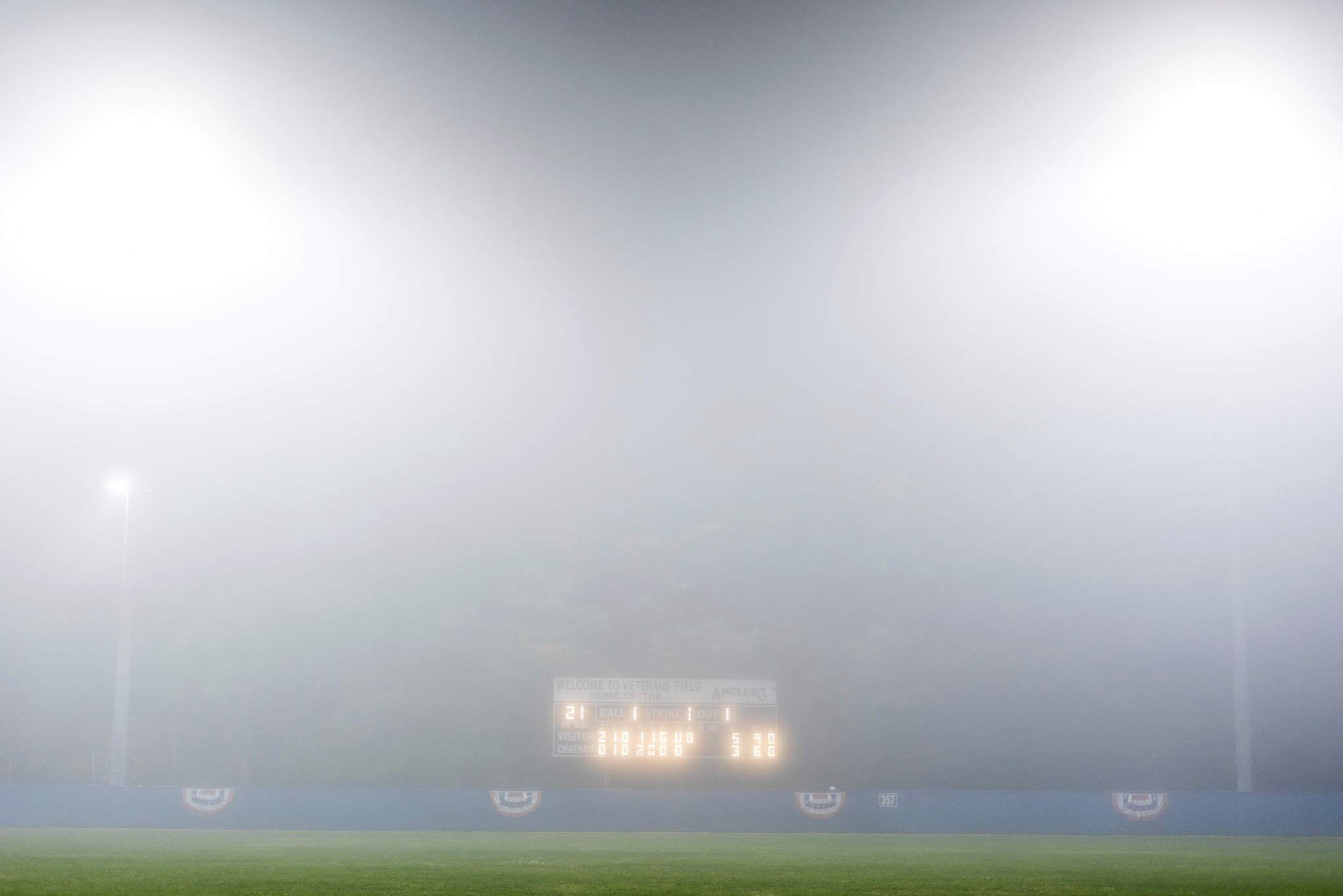 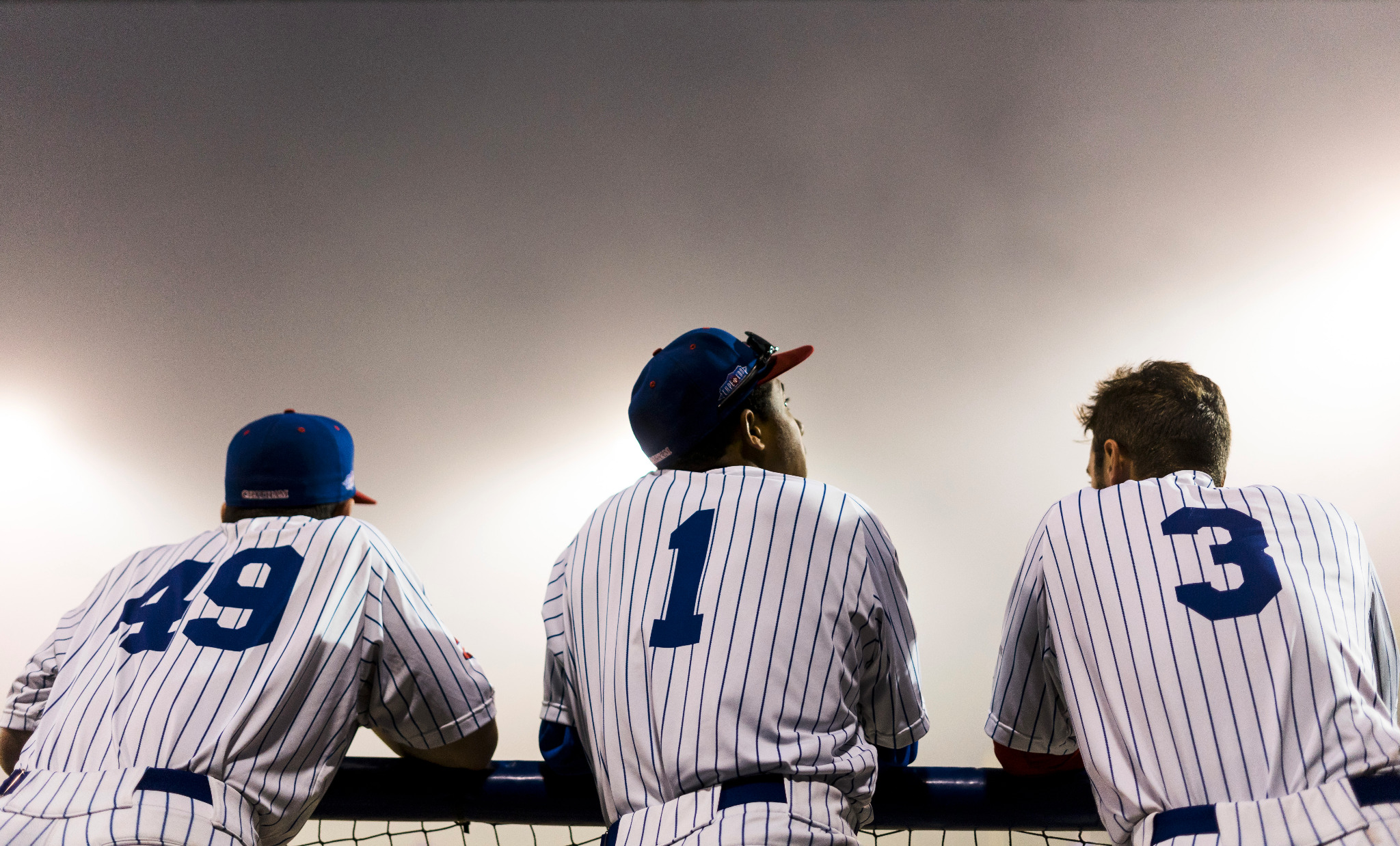 Any logical person would assume that Chatham’s famous fog would prove to be a competitive disadvantage for both teams, leading to low-scoring defensive struggles. Even though that’s often the case, the Chatham A’s – once the Athletics but now the Anglers – have done their best to “weaponize” the weather over the decades.

Before the era of cellphone weather apps, legendary A’s manager Ed Lyons leaned on local fishermen for weather reports during his seven-year tenure (1976-’82). When Schiffner assumed the role of A’s manager in 1993, Lyons’ former understudy inherited his mentor’s network of fishermen forecasters.

“I had a bunch of fishermen who would call me when weather conditions on the water led them to believe that fog might affect that night’s game,” says Schiffner. “They couldn’t pinpoint the exact timing of when the fog would arrive, but they were very rarely wrong when they said we'd get fog on a given night.

“After these calls, I’d always say, ‘Thanks, skipper,’ and start making plans for the game,” adds Schiffner. “I was lucky that whenever I made major lineup or pitching changes [based on these reports], it never backfired.” 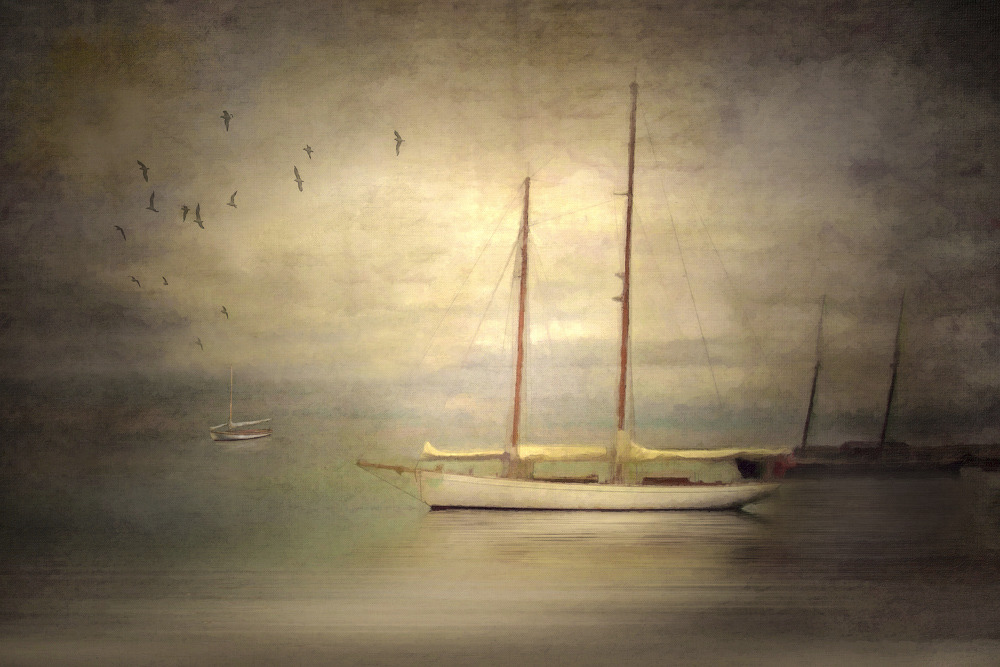 Whether it was Willard Nicholas (a.k.a Nick the Barber), sport fisherman Ron McVikar or the town’s many other fishermen filing reports with Lyons and Schiffner, knowing when severe fog might impact a game provided a modest home-field edge for the A’s.

“When I knew there was a high likelihood of fog, I could make bullpen adjustments like having our closer put his shoes on in the bullpen in the fourth inning so I could have him come in early in the fifth to close out a foggy game,” says Schiffner. “We snagged a few wins that way over the years.”

Informed by his old-school network, Schiffner became very adept at understanding Chatham’s distinct weather patterns, according to Chatham A’s Vice President Bob Sherman. “If John Schiffner had a second career,” says Sherman, “he would have been a good meteorologist. It’s critical to know what the weather will be for mariners, but also for baseball managers in Chatham.”

While this particular game didn’t fall into the win – or loss – column for Schiffner and the A’s, it might be best that the game was called, according to Dan D’Uva, who still oversees the Chatham A’s broadcasting internship program.

“I suppose it’s better the way it happened because the ‘fog game’ is now part of Cape League lore,” says D’Uva. “If the game had been official, I feel that no one would be talking about it today.”

But Andrew Miller’s “fog game” is only one of the many rich Cape League legends that continue to circulate – by word of mouth – throughout the region and in baseball circles around the country. Of America’s four major sports, baseball has the best oral-storytelling tradition, and that helps to keep legends like this one alive, even if it’s a wee bit embellished with each re-telling.

“When it comes to storytelling in the Cape League,” says Schiffner, “I always say that a good starting point is taking whatever a guy says, divide it by two, and you go from there.”