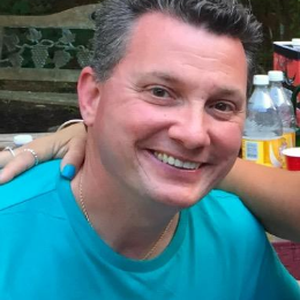 A lifelong storyteller, I began my career as a “cub reporter” covering my high school’s hockey team for the Daily Transcript newspaper in Dedham, Mass. As a senior at Xaverian Brothers High School in Westwood, I would attend a game, take copious notes, conduct post-game interviews, race home to my typewriter, pound out a game story and rush the hard-copy to the nearby Transcript office prior to our midnight deadline. Once I got a taste of the newspaper business, I was hooked. If I had been born a generation earlier, I would have spent my career as a journalist and editor.

After completing a self-directed readings-and-research project titled, “Ethics in Journalism,” at WNEV-TV, Channel 7 in Boston, I graduated from Boston College and went back to work as a sports staff writer for the Transcript and the News Tribune, a pair of daily newspapers that covered a number of suburban cities and towns to the west and south of Boston. 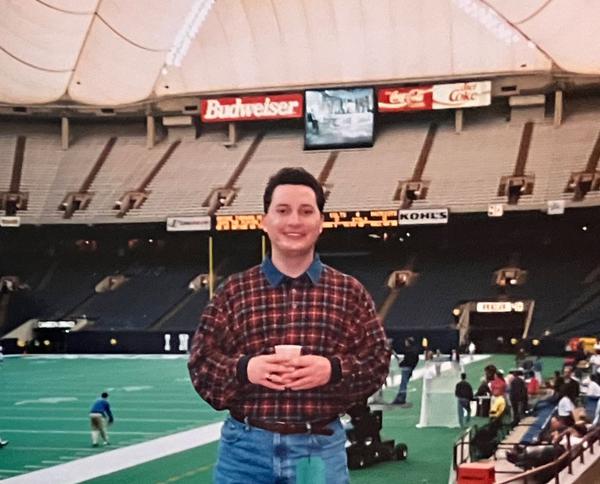 The RCA Dome, home to the Indianapolis Colts, played host to a number of memorable Colts-Pats games in the mid-1990s. 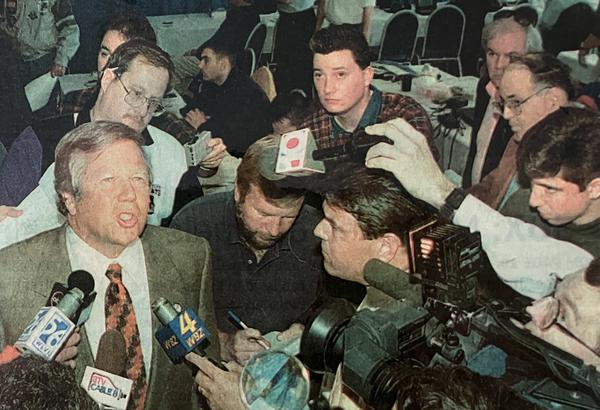 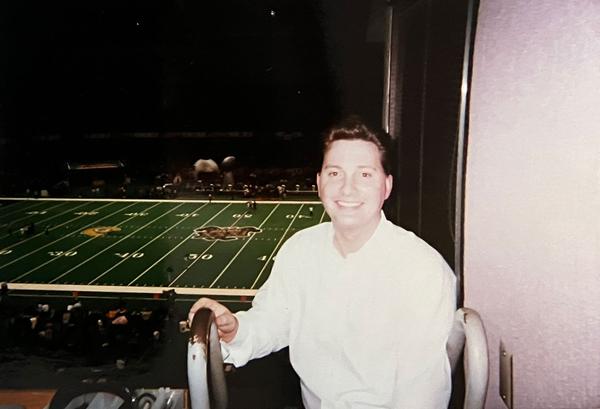 In the press box of the Louisiana Superdome prior to Super Bowl XXXI on January 27, 1997. 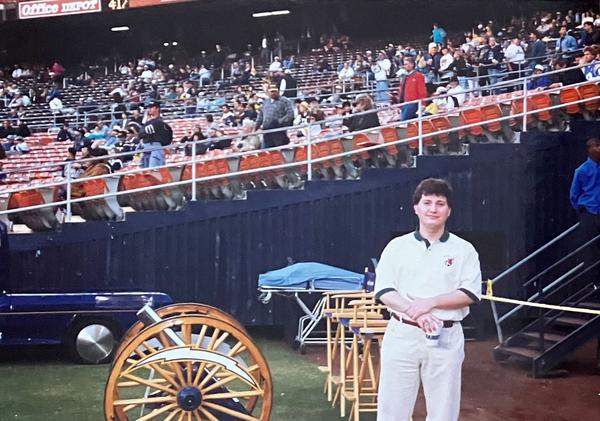 Charged Up in San Diego 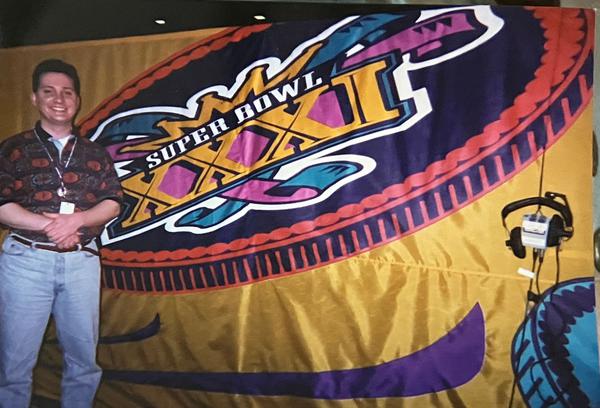 While interviewing Patriots running back Dave Meggett during Super Bowl XXXI Media Day, I accidentaly wound up on ESPN's SportsCenter that night. 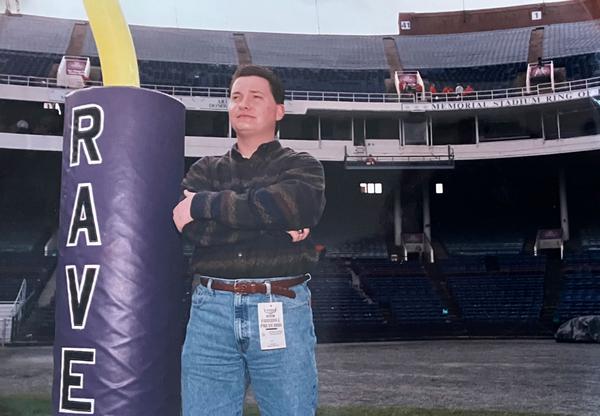 A Game to Remember at Memorial Stadium

In the Baltimore Ravens inaugural season, I covered a barnburner of a game at old Memorial Stadium, onetime home to Colts legends Johnny Unitas, Art Donovan and Raymond Berry. 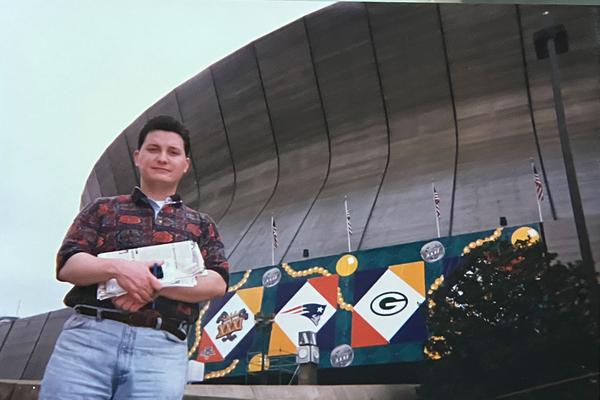 Armed with my trusty tape recorder, a copy of the New Orleans Times-Picayune and with a notebook and pen in my back pocket, I paused outside the New Orleans Superdome before attending Super Bowl XXXI Media Day. 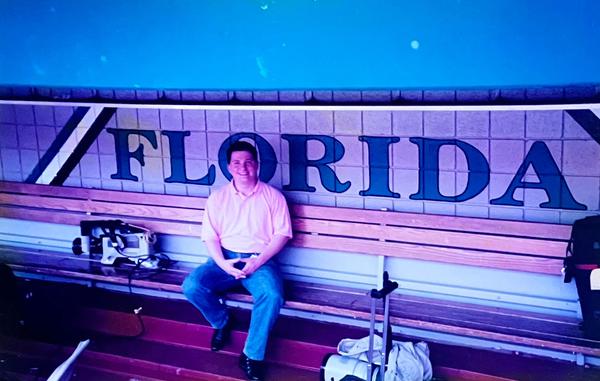 Prior to a Patriots-Dolphins game in September 1996, I ducked inside the Florida Marlins dugout at Joe Robbie Stadium to avoid the sweltering Miami heat.
Load More
Close ✕

While I loved the journalism game, the disruptive advent of widespread internet access was beginning to negatively impact the newspaper business. After consulting with a variety of mentors and career contacts, I devised a plan to make a career pivot to the corporate communications field.

First, I was advised to seek an opportunity at a public relations agency, so I went to work at the David P. Monti Advertising & Public Relations Agency in Providence, RI. During my time in Rhode Island, I gained real-world business experience while helping clients to communicate with a variety of stakeholders. After a year at the Monti Agency, I earned my first organizational communications role at Bentley College, where I handled internal communications and public relations for the Waltham, Mass., business school.

While at Bentley, I realized that web pages and websites were rapidly replacing print publications, so I made a conscious decision to develop my technical skills. After taking several HTML web-programming courses at Bentley, I hand-coded my first writing portfolio website in the late 1990s and positioned myself as web-content developer and web-content manager for future employers. 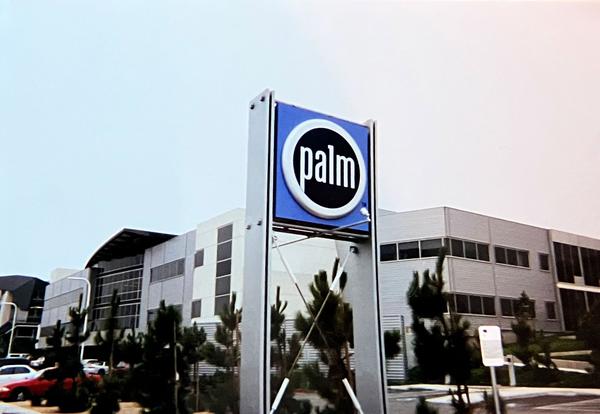 Palm headquarters was located in Santa Clara, Calif., close to the current home of the San Francisco 49ers' Levi's Stadium. 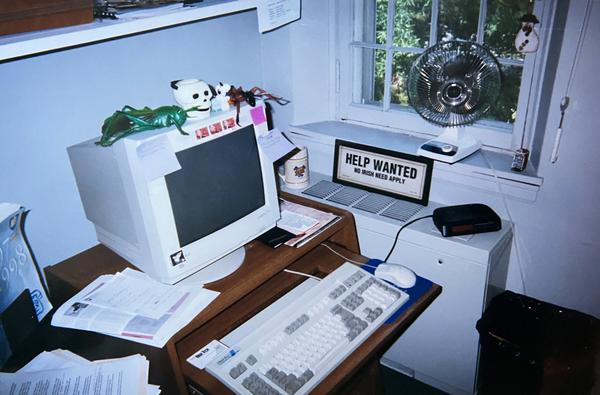 I enjoyed mid-1990s "cutting-edge" tech while working at Bentley College's Lewis Hall, a cozy former mansion turned office space. I kept a "Help Wanted. No Irish Need Apply" sign next to my desk as a reminder of the anti-Irish sentiment once common in the U.S.
Load More
Close ✕

Where I’ve always loved the art of writing, editing, communicating and developing/managing web content, I’ve embraced the role of “worker bee” and prefer the role of an individual contributor. I’ve never aspired to climb the corporate ladder or manage teams. As a result, my corporate communications career has typically consisted of a series of two- to five-year assignments – mixed in with some consulting work – in a variety of industries that includes advertising, public relations, health care, banking/financial services, higher education, high-tech, sports and consumer goods, among others.

After working for Bentley and in the aftermath of a parent’s untimely passing, I engaged in full-time consulting work for Reebok and Palm, Inc.; handled writing assignments for Northeastern University, NStar and the Boston Herald, among others; and developed websites for some small businesses and not-for-profit organizations on the South Shore. I returned to permanent roles for the Dana-Farber Cancer Institute, Liberty Mutual, and then enjoyed a five-year stint handling internal communications and intranet management for the Federal Reserve Bank of Boston (Boston Fed).

Then, during the Financial Crisis and ensuing Great Recession, unemployment and underemployment were all too common issues for workers*, especially for mid-career and senior-aged employees who had to battle age bias based on erroneous assumptions. I was no exception, experiencing some unfortunate career instability. For several years, I alternated between full-time roles and contract gigs, and fell victim to a couple finance-driven layoffs. In one instance, I received a raise and a promotion during an annual review, only to be told six weeks later that my role was being eliminated for financial reasons.

Fortunately, since 2019, I’ve found a very good professional home at Sensata Technologies. Reporting to an excellent supervisor who is a compassionate, inspiring leader, I’ve worked to build out the Information Technology Department’s employee-communications function. Most recently, we launched a new, modern corporate intranet, and I earned a Sensata Technologies Personal & Business Leadership Award for my role in this project.

My career highlights include:

When he’s not at the office, Joe treasures time with family, is an avid walker, loves Boston sports and is passionate about Boston College football. When he has time, Joe loves tackling the occasional freelance feature story for Cape Cod LIFE Magazine.

* See paragraph #4 of "The Economy’s Fundamental Problem Has Changed," by The Atlantic's Annie Lowrey (December 26, 2022)